In action for Australia: bushfires and solidarity 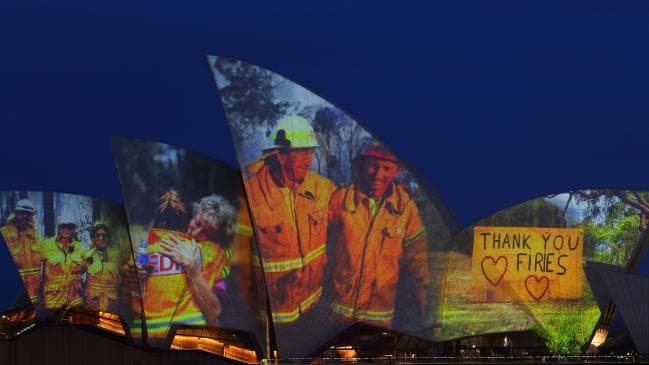 Australia is under fire, we all know it. As a school that cares so much about the environment, we could not avoid talking about what is going on in our beautiful and much loved Australia. First, we would like to update you with some information. Then, in this article, we also share a testimonial on Facebook that went viral, signed by a woman named Liz Barrett. We hope it touches your heart as much as has touched ours. And, to finish, we share names of organisations and charities that have been helping people and wildlife to recover, in case you feel the need to help – either with your hands or a financial donation. Please, keep reading this article. The sacred lands of Australia needs all of us. 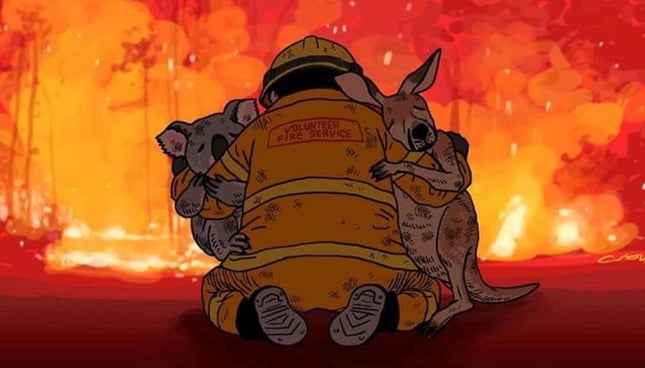 Climate heating is not the cause of bushfires. Although, scientists explain that a hotter and drier global climate has contributed to Australia's fires becoming more frequent and intense. "What climate change does is exacerbate the conditions in which the bushfires happen", affirmed Australian National University climate scientist Dr Imran Ahmed to BBC.

Recently, we published a blog post explaining the connection between the Amazon fires and the Australian fires. It is related to climate heating.

Drought conditions became common in many parts of Australia, which makes the fires spread and grow. Also, Australia has warmed up more than one degree Celsius since 1910, according to the Bureau of Meteorology. 2019 has been the driest year in Australia in comparison to the last 50 years. 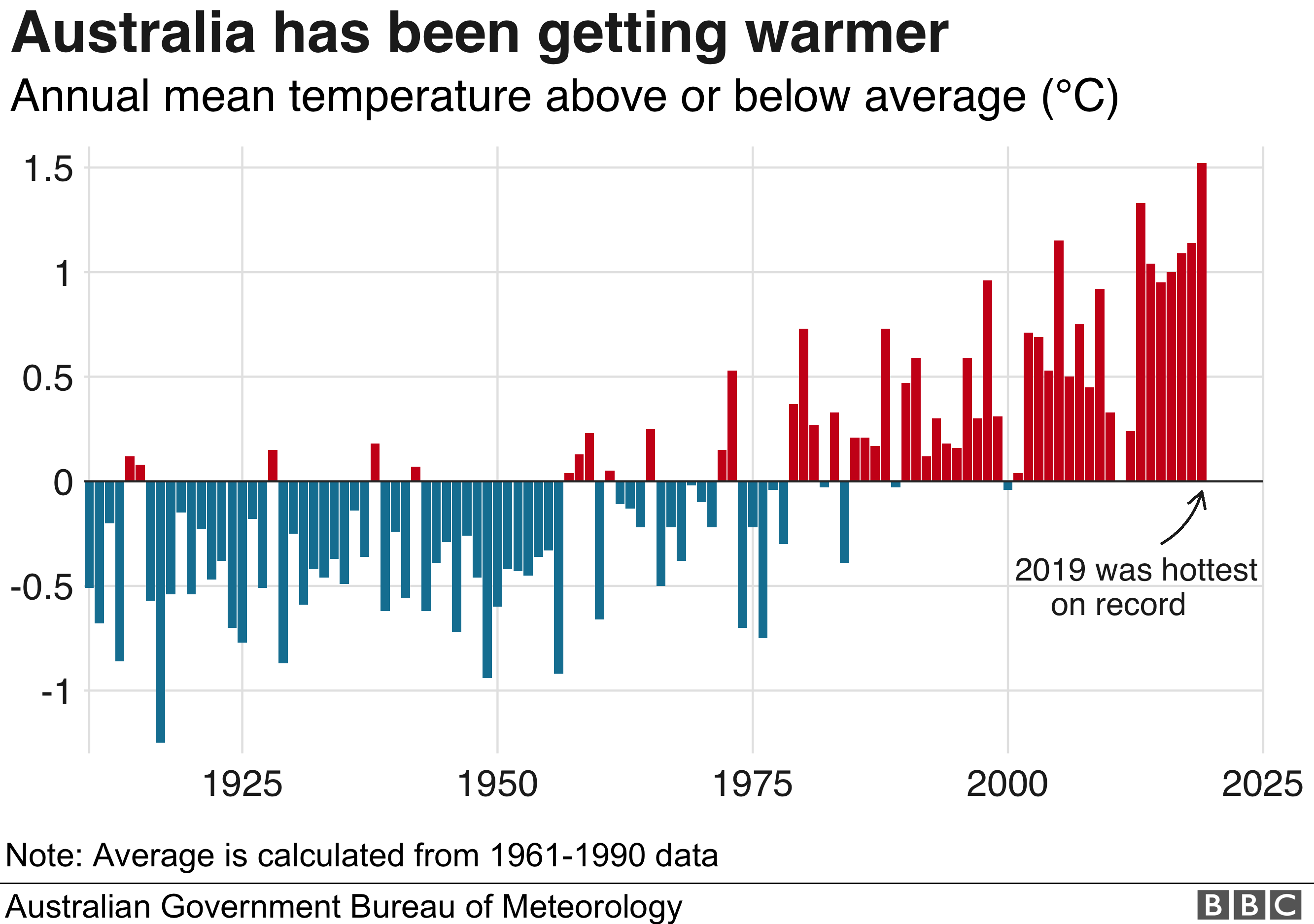 Besides all this, there is a phenomenon behind the heatwave, called positive Indian Ocean Dipole (IOD), this is when sea surface temperatures are warmer in the western half of the ocean and cooler in the east. This event provokes rainfall and floods in eastern Africa and droughts in south-east Asia and Australia – although, even this phenomenon has become more intense than in previous years.

WHERE IS AUSTRALIA BURNING?

Mostly Victoria, South Australia, and Western Australia - these are Australian states which have traditionally had bushfires each summer. In recent years, fires have also flared up in Tasmania and sub-tropical Queensland.

33 people have so far been killed

10 million hectares of bush, forest and parks has burned

A billion animals have died, according to Prof Chris Dickman, an expert on Australian biodiversity at the University of Sydney. 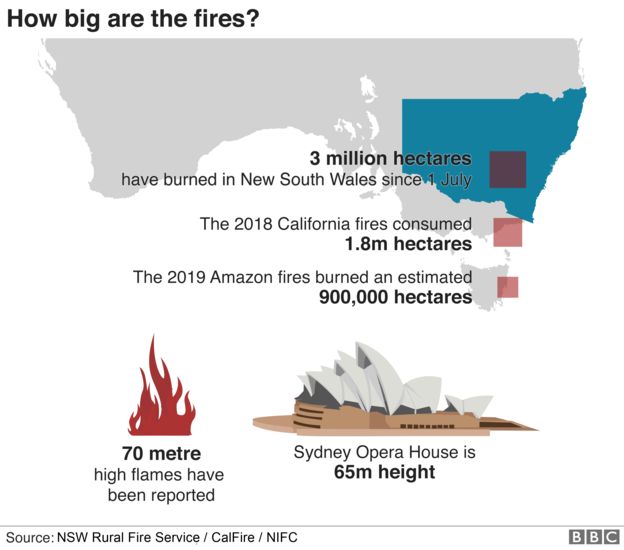 The bushfires have mobilised thousands of people across Australia to get together and help with whatever was - and still is – possible. Videos went viral showing people risking their own lives in the midst of flames to save Koalas, Kangaroos and Bats.

Firefighters have become the number one heroes of our nation. New South Wales Rural Fire Service (NSW RFS) calls itself "the world's largest volunteer firefighting organisation" thanks to its 70,000 trained and mostly unpaid members. 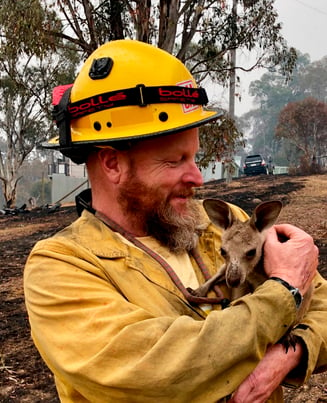 Celeste Barber's bushfire fundraiser on Facebook raised more than $30 million in less than 2 days and has now reached over $50 million! It is, officially, the largest in the platform's history. Besides this, international communities have been mobilised as well to raise funds and awareness about how serious the bushfires are that Australia has been experiencing.

We now share a testimonial from a woman called Liz Barrett, that went viral on Facebook. Bring your tissues, you may need it.

I received this news and felt like sharing it. Not only is there the world that tv news shows us, but there is also another silent world that begins to live in love.

I posted this as a comment on Australian Forest fires and now I'm following the impulse to make this my first post in this beautiful group.

The perspective of each individual is true and valid for you. This is mine.

I live in Australia and I chose a perspective that suits me best.

My heart is so full I've never experienced so much love, deep compassion and understanding between complete strangers, and it showed me the most beautiful aspects of humans. I feel very honoured to be human and live in this beautiful country.

There are unprecedented fusion of generosity across the country and now in the world. The hard work and dedication of firefighters and women are surprising. They are mainly volunteers who leave paid work to help their compatriots.

There are people leaving their own beds to sleep in a tent in their gardens, so the evacuated have a bed to sleep. People are opening their homes, lands and lives to strangers and welcoming them with open arms of pure love and compassion. This is absolutely beautiful.

People are donating so much money and items and love without the need of appreciation or recognition. People are offering to help rebuild homes with offers of heavy machinery, work, experience and time out of their own lives, just because they want to donate.

People travelled over 700 miles during the night to cook food making meals for the needy. Hotels offer free accommodations. There are people who have created fb groups so people who have nothing else can join the people who want to donate and help. The Admins of these groups are working tirelessly to help thousands and thousands of people.

People are feeding wild animals in their homes. People are offering nanny support and care to the elderly, paying for the food of people who can't afford it - complete strangers are showing compassion to those suffering as though they were their own family.

I lost everything that was familiar to me in the past (not a fire) and although challenging, it was exactly what I needed and showed me more of who I am. It is with compassion that I can see those who have lost everything will rise like a Phoenix.

There's a forest near my house that was burned 4 weeks ago and growth has begun. Nature knows exactly what it's doing. It's starting to bloom like never before like amazing human beings in this country.

My heart is exploding with love just to witness the size of people's hearts and how much we are able to do.

I've never been so proud to be a human being. Never. The new earth is not coming - it's here now and it's so beautiful.

GET INVOLVED. HOW TO HELP 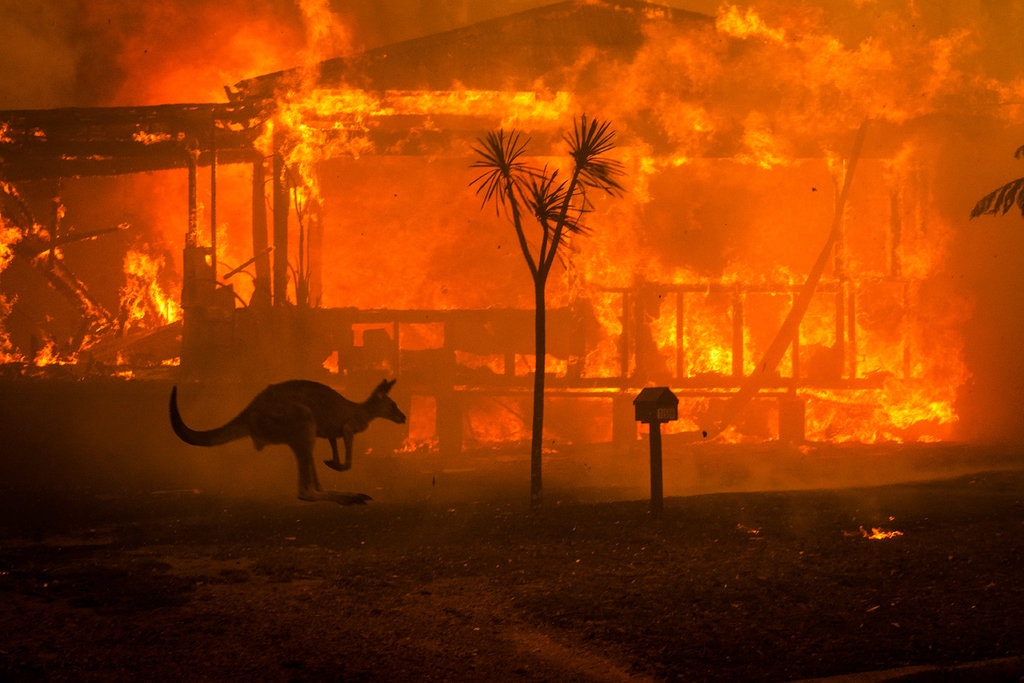 Friends of the Koala

Wildlife in Need of Care

Donations (of food, clothing etc) are being accepted at any Woolworths checkout

Airbnb have the OpenHomes project. You can be part of a hub of people that host for free people in need in the fire zones.

Support Australia as much as you can - we are in a state of emergency. Please, share this article with your friends and tag the ones you think will donate and benefit from this information.